Get Celebrities to Promote your Product on Amazon Live!

Most sellers tools and strategies are oriented around keyword targeting, listing and PPC optimization. These is no doubt that getting these right is important. But unlike in the past, when well optimized listings and ads gave you a competitive advantage, today’s hyper competitive marketplace requires much more to truly succeed.

Celebrity endorsements are often viewed as the pinnacle of business success, available to only the largest companies with multi-million dollar marketing budgets. Fortunately a new program offered by Amazon and facilitated by Rebaid makes celebrity endorsements attainable to even the smallest of brands. Amazon Live which launched in late 2020 is a shoppable streaming platform hosted directly on Amazon, where influencers share and demo their favorite products.

Viewers of the live streams can click a product tile beneath the video frame and purchase a product being featured with ease. This frictionless purchase experience for shoppers translates into high conversion rates. Moreover, since Amazon Live is still a fairly new program, placement cost with influencers remains low relative to the exposure generated. 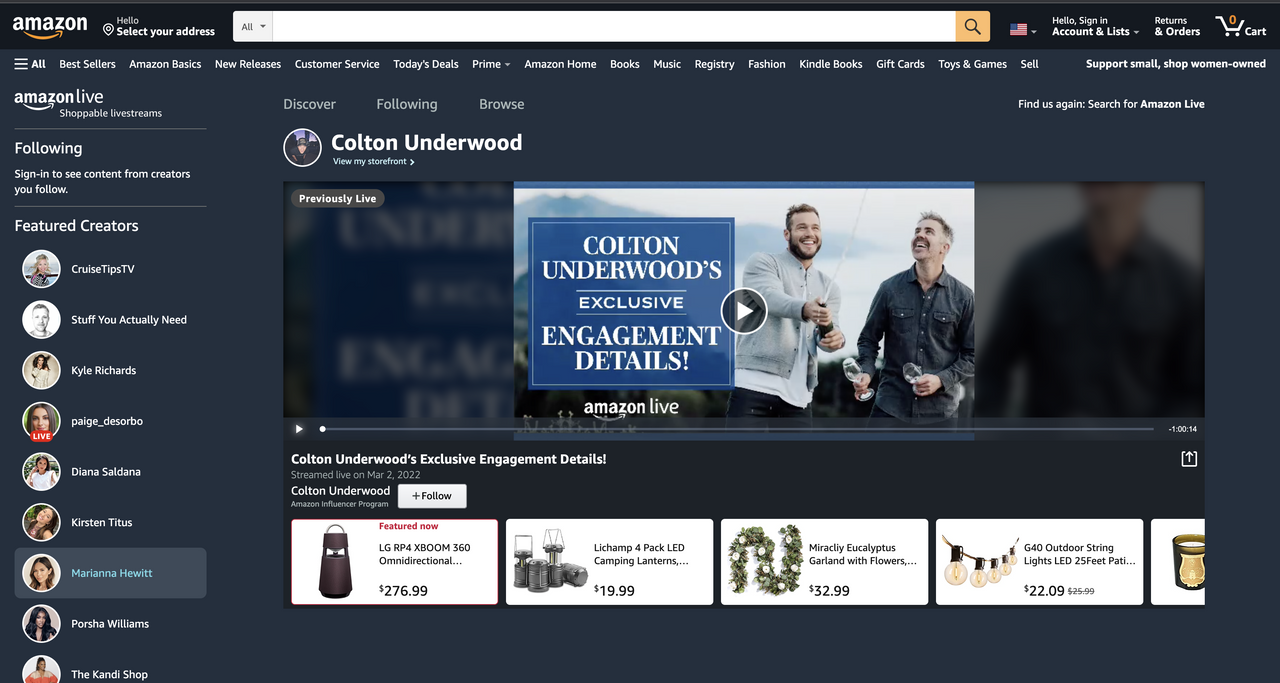 The UNREAL Value of Celebrity Endorsement on Amazon Live

Getting a celebrity endorsement of your product or brand on Amazon Live may seem cool, and an exciting achievement to share with friends and family. But beyond the superficial perks, it is a smart and rewarding business decision as well. To explain why we’ll use the influencer in the screenshot above.

Colton Underwood, from ABC’s the Bachelor TV show has over 2 million followers on social media. The placement cost to have a product featured in one of his Amazon Live broadcast is $2,500 when purchased through Rebaid (more on that later). While a minority of his social media following will likely view his Amazon Live videos, the total views will almost certainly exceed the impressions your product generates through sponsored products and all other ad formats you are currently utilizing.

Live streamed videos remain available for playback on the influencers Amazon Live storefront for month after the live event. Celebrity influencers often generate hundreds of thousand of views on their videos including live views and recorded playbacks. This means your product generates large and ongoing exposure for a one-time placement fee. Even more compelling is the alignment of incentives..

Your Celebrity Salesperson, Subsidized by Amazon!

Amazon Live influencers collect commission on all sales that come through their livestreams. This commission which is funded by Amazon encourages influencers to persuasively pitch the products they are featuring, and drive their social media audience to their Amazon Live storefront.

As a brand owner, this in effect means Amazon is subsidizing the cost of celebrity endorsements and content production. As previously mentioned, Colton Underwood charges $2,500 for a product feature on Amazon Live. By contrast his rate for an Instagram post is $10,000. The reason for the wide variation in cost is commission. A post on Instagram does not generate any commission revenue for the influencer, where as a celebrity influencer posting content on Amazon Live can reasonably expect to collect thousands in commission revenue. With Amazon funding the influencers commission, brand owners have the opportunity to partner with celebrities that may otherwise be beyond their budgets.

How to Make Connections

As you may have guessed, getting in contact with celebrity influencers is not an easy task. These influencers and their agents are bombarded with brand promotion and endorsement request. Even if you are able to make contact, most will have high minimum cost thresholds and will seek longer term commitments.

Fortunately with Rebaid’s new influencer program these hurdles are all cleared. Rebaid has partnered with dozens of Amazon live influencers ranging from smaller niche influencers through celebrity influencers like Colton Underwood and NAME. Rebaid pre-buys placements with these influencers in bulk, taking advantage of group buying power and passing along these discounted placements to brands on Rebaid.

To create your first influencer campaign today, start by creating a Rebaid Seller account. Once created click the Influencer Campaign button at the top of the page. You'll be prompted to enter simple information including product category and campaign goal. Once entered you'll see all influencers that match your criteria. 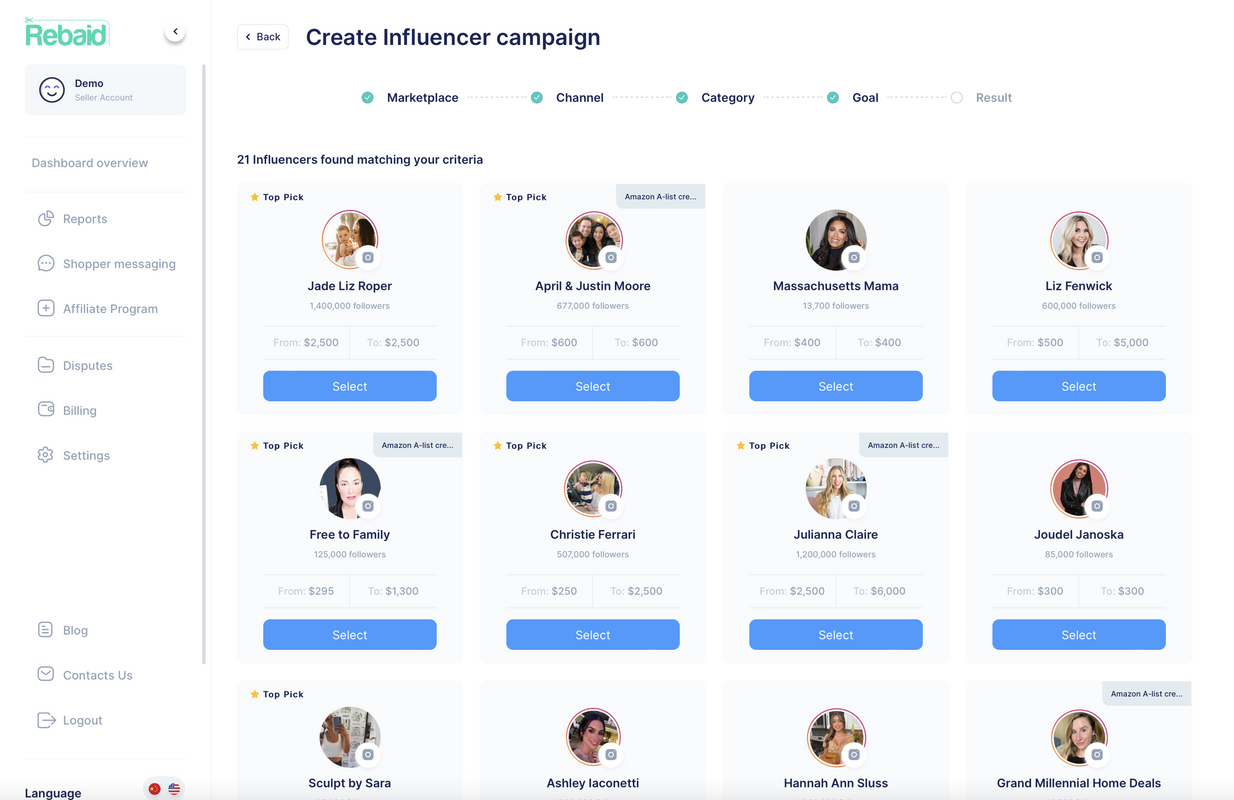 Pro Tip: When choosing an influencer on Rebaid look for the "Top Pick" and "Amazon A-List" tags. Top Pick is a designation given by Rebaid indicating that the influencer has an established history of responsiveness and production of high quality content.

Influencers marked as "Amazon A-List" is a designation provided by Amazon. Influencers with this tag are Amazon's top performing influencers. For an influencer to acheive this label they must have generated a large volume of sales from their live streams and meet certain criteria for viewer engagement. Selecting an Amazon A-List influencer maximizes the likelihood your campaign will be successful!

Interested in getting your product on Amazon Live but have questions? Shedule a free Demo Call.